Group photo after our vist to The D-Day Museum 2019.

This year the Friends visited Eltham Palace and Gardens at Greenwich, London. This is an English Heritage site that has a stylish house built in 1933-6 by the architects Seely and Paget for Stephen and Virginia Courtauld. They incorporated into their design the great Hall, the most substantial survival from the medieval royal place. Like the house, the palace’s 19 acres of garden features both 20th century and medieval elements.

Group after the Eltham Palace visit

It was the Headquarters Fighter Command during the Battle of Britain. It highlights the contribution and importance of “The One” Air Chief Marshal Sir Hugh Dowding, “The Few” the Aircrew who took to the skies, and “The Many”, without whose tireless work on the ground victory would not have been possible.

The map room has a large map where the D-Day landings were planned.

This imposing Victorian fort is home to the Royal Armouries national collection of artillery – The Big Guns.

Strategically positioned atop Portsdown Hill, with panoramic views across the Meon Valley and Portsmouth Harbour, Fort Nelson is an historic monument, restored to how it would have been in the 1890s. Visitors can access most areas of the fortifications and see how the Fort would have operated.

The museum’s displays trace the development of artillery from pre-gunpowder siege machines to modern-day super guns.

There are over 350 big guns on display. Fort Nelson has just undergone a multi-million pound redevelopment transforming it into a museum for the 21st century. Featuring a new visitor centre, a new café and new galleries, including the magnificent Voice of the Guns gallery. 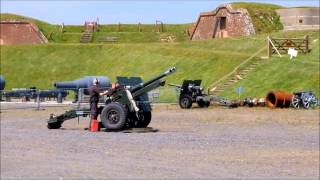